Guilford, Conn. - The Elite Hockey Academy is happy to announce that we will be offering two new teams for the 2021-2022 season, a new 19U Fall Prep and 16U Fall Prep teams.

With these two newest teams, the Elite Hockey Academy will bring the number of teams that EHA will offer for the upcoming 2021-2022 season to 15. Elite Hockey Academy President Peter Alden is excited about the addition of these two teams. “We are excited to welcome these two new teams to the EHA staple,” said Alden. “I think the staff that we have assembled is among the best in the area, and we are excited to help prep and high level high school players prepare for their upcoming season.”

19U Prep Team (’02 – ’04) and 16U Prep Team (‘05-’06): The U19 and U16 prep teams will consist of players who attend prep schools all across the New England area. The 19U and 16U prep teams will solely play games on the weekends, Saturday evening, and Sunday mornings, except for tournaments, where Friday night games could be a part of the schedule. There will be no practice with both of these teams. This format will allow players for exposure to elite competition, exposure to Division 1 and 3 colleges, and help players prepare for their upcoming prep school season. Each team will play 20 – 25 games throughout the fall season as the season will start on Aug. 26 and end on Nov. 7, 2021.

The 19U Prep Team will be led by former Boston University Captain, Pat MacGregor. MacGregor, born and raised in Hamden, played his prep school hockey up Route 10 and I-84 in Avon for one of the best prep school programs in the country, at Avon Old Farms for legendary coach John Gardner. He spent four years on Comm. Ave. with Boston University, and after graduating, he spent a year in the East Coast Hockey League (ECHL), playing for the Gwinnett Gladiators.

The 16U staff will be led by Peter Gintoli, who has spent the last few seasons coaching our U14 and U15 teams at the Elite Hockey Academy. Gintoli played college hockey for Salve Regina and played one year of professional hockey in the SPHL with the Roanoke Rail Yard Dogs. He will be joined behind the bench by his longtime assistant Ben Viccari.

The assistant coaches for both the 19U and 16U Prep teams will be Guilford native. Jack is currently serving as an assistant coach at his alma mater, Amherst College, where he played four years of college hockey. While at Amherst, Jack served as a captain in his senior year and led his team to the NESAC Championship game, where they lost a heartbreaker to Trinity College.

Do you want to play for the Elite Hockey Academy? If you do, you can register for tryouts by clicking here. If you have any questions, you can reach out to Peter Alden or if you have general questions about the program, click here.

Located in Northford, CT, Elite Hockey Academy is the fastest-growing hockey academy on the east coast involving advanced training, high-level competition and educational institution. Established in 2016 as the Elite Hockey Academy now spans over 15 competitive teams and continues to evolve and expand as the industry leader for athletic and performance development. Our history of success remains unrivalled around the nation, and Elite Hockey Academy continues to develop elite athletes who achieve success at the Junior, collegiate and professional levels. Elite Hockey Academy provides an all-inclusive campus for ice hockey players from mites to midgets. Our first-class location includes professional facilities and accommodations with three ice rinks, a 5000 square foot training facility and a wide variety of programming, including an 8-12th grade Academic Academy, offering team training, skills training, and professional development. 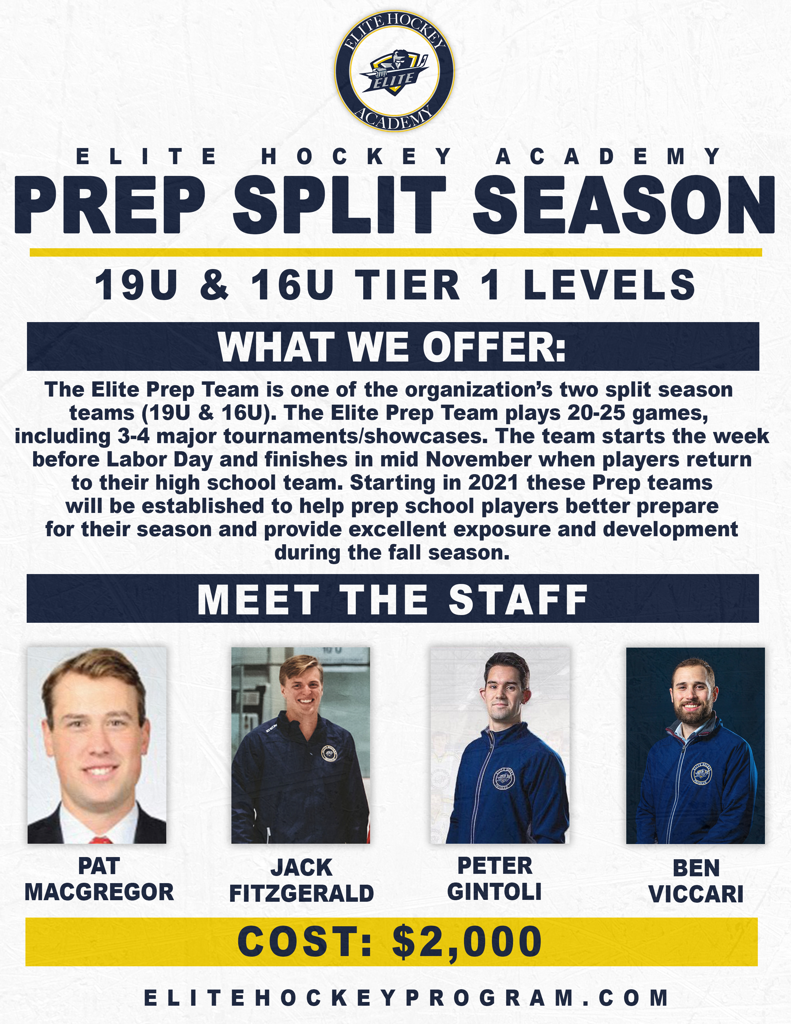