May 14, 2021, Guilford, Conn., - The Elite Hockey Academy is happy to announce that EHA defensemen Evan Smutney has been selected by the Jersey Hitmen in the NCDC Entry Draft this week.

Elite Hockey President, Peter Alden, believes Smutney has earned this opportunity and has improved significantly since he first started coaching Evan. “I’ve been coaching Evan the last two seasons here at EHA, and he’s earned this opportunity," said Alden. “Evan is a worker, and he’s improved his game over the last two years. Two seasons ago, as a 15-year-old playing U16's, you saw that he had a lot of ability, and he could be one of the best players on the ice one game, and then he would have a few bad games. Then this past season, he started to put it together, and he became a dominant force on the ice this season. As his confidence grew, he became our best player. But I’m happy for Evan to be picked by such a great organization like the Hitmen that have a proven track record of developing players and getting them to the next level.”

After learning he was drafted by the Hitmen, Evan was excited about being drafted by one of the best organizations in junior hockey in America.  “It’s a huge honor to be drafted by the Hitmen,” said Smutney. “They are one of the top organizations in junior hockey, and I’m excited to be a part of the Hitmen family. I want to thank my parents and my brother Mason who have pushed me and made me into the person that I am off the ice. I also want to thank my coaches that I have had here at EHA in Coach Rob Dow, Coach Geoff (Marottolo), and Coach Alden who have made a better player on the ice. I also want to thank my teammates here at EHA who have pushed me and that I have formed lifelong friendships with over my three years I have played here at EHA.”

Smutney has been a critical member of the EHA family since he joined EHA in 2018. His first season at EHA, he was part of a U14 team that finished second in their division in the 2018-2019 season and part of a U16 squad in the 2019-2020 season that went on a 40-10-2 run after October 1, and won the 2020 World Sport School Challenge while also making AYHL Playoffs.  In his last three seasons at EHA, Smutney has put up 61 points in 117 games in his career with EHA.

The Jersey Hitmen are a junior organization based out of Wayne, N.J., and have six Dinnen Cups. The Hitmen and EHA have a long history as the Hitmen just last year, picked former EHA forward Frankie Hipp, and have seen four former EHA players play for the Hitmen, including Josh Waters and Jarett Overland. To learn more about the Hitmen, click here.

On behalf, we want to congratulate Evan on this great accomplishment. All of the best in the future Evan, you will always be a member of the EHA family.

Located in Northford, CT, Elite Hockey Academy is the fastest-growing hockey academy on the east coast involving advanced training, high-level competition and educational institution. Established in 2016 as the Elite Hockey Academy now spans over nine competitive teams and continues to evolve and expand as the industry leader for athletic and performance development. 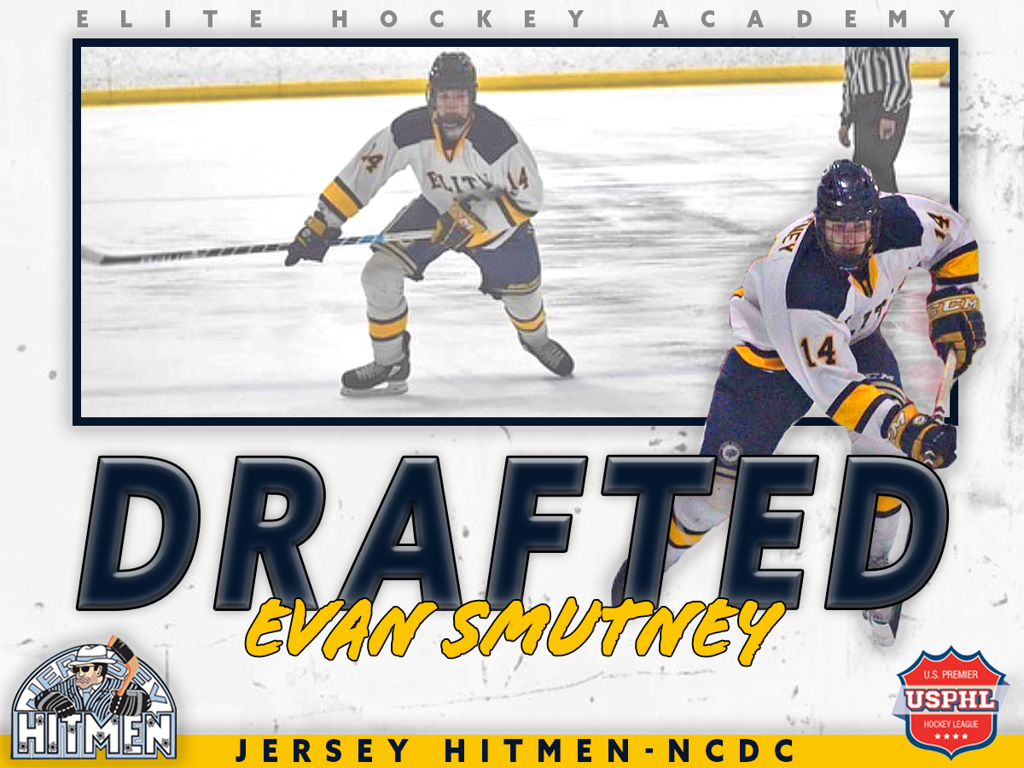