May 7, 2021, Guilford, Conn.,- The Elite Hockey Academy is excited to announce that forward Titus Odermatt will join the U18 team for the upcoming 2021-2022 season this fall.

Elite Hockey Academy President Peter Alden is excited to welcome Odermatt and his family to the EHA family. Alden sees Titus as a player who knows how to use speed, good in the corners, and who is responsible in his end. “I’m excited to welcome Titus and his whole family to the EHA family,” said Alden. “Titus is a player that is a very skilled puck handler and who can make plays that people wouldn’t expect from someone with his size. His main strengths as a player are zone entries and corner battles. But the thing that I love about Titus as a player is that he's always giving his absolute best every shift he’s always going; he's like the Energizer Bunny out on the ice.”

Titus is excited about the opportunity to join EHA, a team he played against during the 2019-2020 season. He also mentioned how he liked how the team practised and how they competed, as to reasons he wanted to join the EHA Program.  “Last year I played against the 18U team and their level of hockey was way better,” said Odermatt. “They were a lot faster and knew how to play the game well. I also like the practices they have and are much better than what I had over the years here at CIHA.”

After spending the last three seasons with the Canadian International Hockey Academy in Richland, Ont., Titus will join the EHA Program. In the 2018-2019 season, he was named an assistant captain and put up 16 points in 30 games at the U15 level. While his most successful season at CIHA came during the 2019-2020 season as he moved up to the high school team, where he was the team's top scorer and averaged over a point a game.

Odermatt comes from a hockey family, as all of his siblings have played at a high level. His oldest brother Lukas played at the Loomis Chaffee School, and he had three brothers Markus, Nicolas, and Thomas, that all played for the Philadelphia Hockey Club in the USPHL this past season and helped them make playoffs. He also has a sister Andrea who plays in the Switzerland Women's Hockey League for the Ladies Team Lugano, where she has won three SWHL Championships and two Swiss Women’s Cups since she turned pro in 2015.

We all wish Titus nothing but the best as he joins the EHA family. Titus signing will make him the second player born in the Land of the Rising Sun to play for the Elite Hockey Academy. He joins former EHA forward Keitaro Yasuda as the only two players born in Japan to play for EHA.

Located in Northford, CT, Elite Hockey Academy is the fastest-growing hockey academy on the east coast involving advanced training, high-level competition and educational institution. Established in 2016 as the Elite Hockey Academy now spans over nine competitive teams and continues to evolve and expand as the industry leader for athletic and performance development. 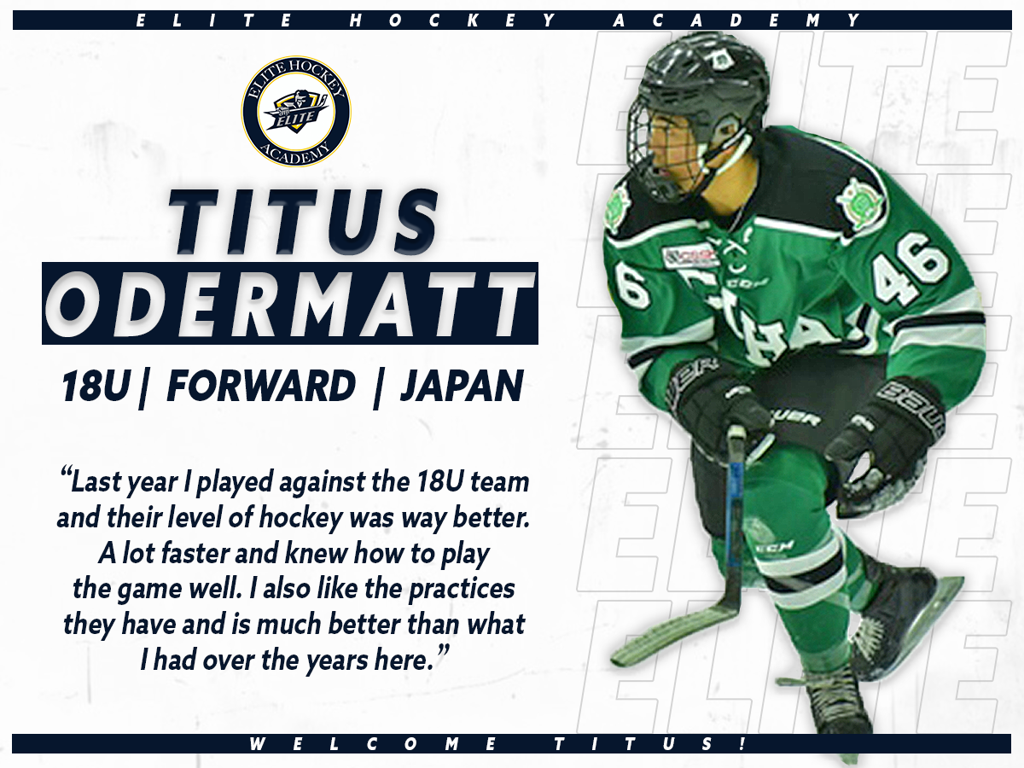